In the wee hours of the morning Sunday, before dawn has broken, Gretchen Schoenstein will slip into her running gear, ready to run the Napa to Sonoma Wine Country Half Marathon. She’ll walk into her bedroom closet, go to a basket, open a zip-lock baggie, pull out a 15-year-old hospital ID bracelet and thread it through one of her shoe laces.

The bracelet is a reminder. A reminder of when she was hospitalized for eight days on a morphine drip, battling an autoimmune disease. Of how her body was ravaged, her joints swollen, inflamed, warm to the touch, how her lungs were so damaged it hurt to breathe.

“It was frightening how much I hurt,” recalls Schoenstein, who lives in Sonoma.

The bracelet reminds her of how doctors told her she’d never run again. And it will remind her of how wrong they were. Because while doctors can diagnose a disease, they can’t measure a person’s will. Come later Sunday morning, Gretchen Schoenstein will run her 100th half marathon, all since that crippling diagnosis.

Asked how she thinks she’ll feel crossing the finish line Sunday, with more than 25 friends and family members celebrating her journey, Schoenstein pauses before saying, “Probably absolutely wild. Absolutely wild. Achieving a milestone like this is beyond my wildest dreams.”

After being diagnosed with Sarcoidosis in 2006, an autoimmune disease that attacks the joints and lungs, Schoenstein was understandably cautious the next three years. Up to then she exercised some, maybe 30 minutes on a treadmill or elliptical trainer, the occasional yoga class.

But in the back of her mind, she was afraid, afraid that if she pushed too hard that excruciating pain would return.

“I lived this fear-based, cautious life,” she says.

Then late in 2009 she was dealt a double whammy. She left a longtime job and on New Year’s Eve, a boyfriend she had dated for 10 years broke off their relationship.

“Two main rugs were pulled out from under me,” she says. “I was in a bit of a freefall. I needed and wanted something to ground me.”

She remembered how training for a 10K years earlier gave her focus. Only this time, she upped the ante, deciding to run a half marathon. Friends asked her why didn’t she start with baby steps, say a 5K.

She ran her first half marathon barely three months later. By the end of 2010 she had run five 13.1-milers.

Schoenstein is intrigued by numbers, so in 2011 she set out to run 11 half marathons. When she got to 25, she started to think of hitting 50, which she reached in 2016 in Brooklyn.

By 2018, 50 had morphed into 75. She liked the travel, liked meeting people who shared her passion. The 99 half marathons to date have covered 17 states, 33 cities and two countries, crossing the border into Canada.

Her favorite running cities include Washington D.C., Philadelphia and Chicago.

“I’ve fallen in love with Savannah (Ga.),” she says. “The reason I love these cities and running in them is that the course designers always show off the best parts of the city and you don’t see it unless you’re running.”

Asked to explain running’s lure, Schoenstein says, “What I like about running, and this is going to sound trite, it is the thing keeps me most curious, the most open, the most present. And the sense of accomplishment and look what I’m capable of. You can’t tell me running 99 half marathons hasn’t taught me a lot about resilience, perseverance. There have been moments of awe.”

Lessons learned running helped her deal with other challenges, be it at work or with relationships. When fires ravaged the region where she lives in October 2017 she came back to run the Napa to Sonoma Half Marathon the next year with a T-shirt that read #sonomastrong on the front. The back of the T-shirt read, “The love in the air is thicker than the smoke.”

By February 2020, Schoenstein crossed off her 89th half marathon in New Orleans. The goal was to run No. 100 by end of the year. One hundred halves in 10 years. Then the coronavirus pandemic struck and races were canceled.

“That was in the early days of Covid,” she says. “When we wiped our groceries down, when we’d go to the opposite side of the street when we saw someone coming. I know everyone was outdoors, but the thing that gave me solace was also scary to do.”

She started running again in August of last year and resumed her half marathon quest this year in August. Sunday’s race will be her 11th half in 112 days.

As to why she squeezed so many races in a short period, she says, “I think part of it is to reclaim and wrest away the loss of so much in the last year and a half (because of Covid).”

In a text, she added, “I felt stronger with each race. I felt a little part of ‘me’ come back as the miles went along.”

Schoenstein hopes her story will inspire others to fight whatever battles they face. She’s considering writing a book about her journey. She’d like to guide a blind runner through a race. She raised more than $15,000 for Operating Shooting Star, which raises awareness and money for autoimmune disease research.

As Sunday nears and the joy of her feat draws close, Schoenstein has reflected on its significance. 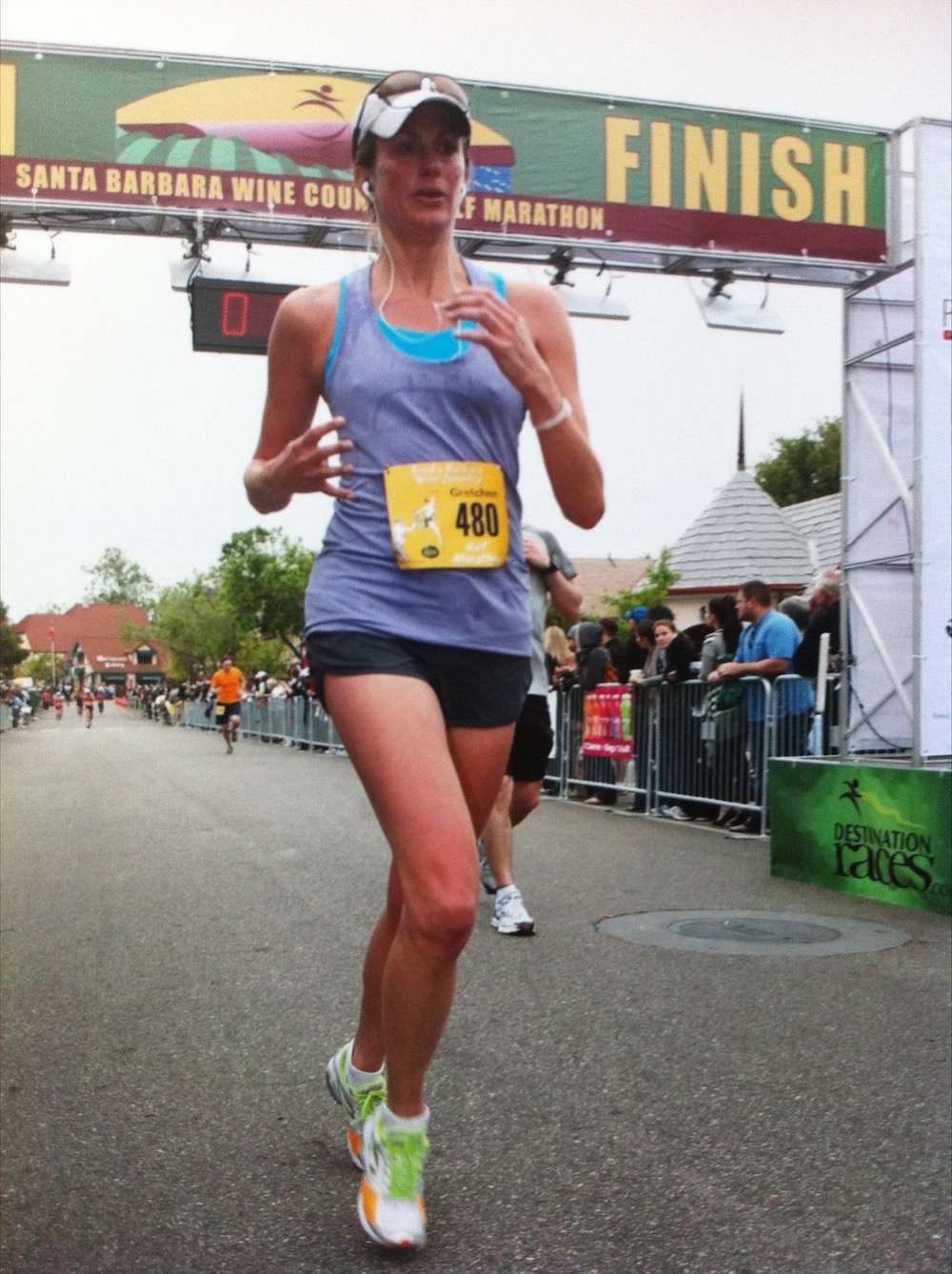